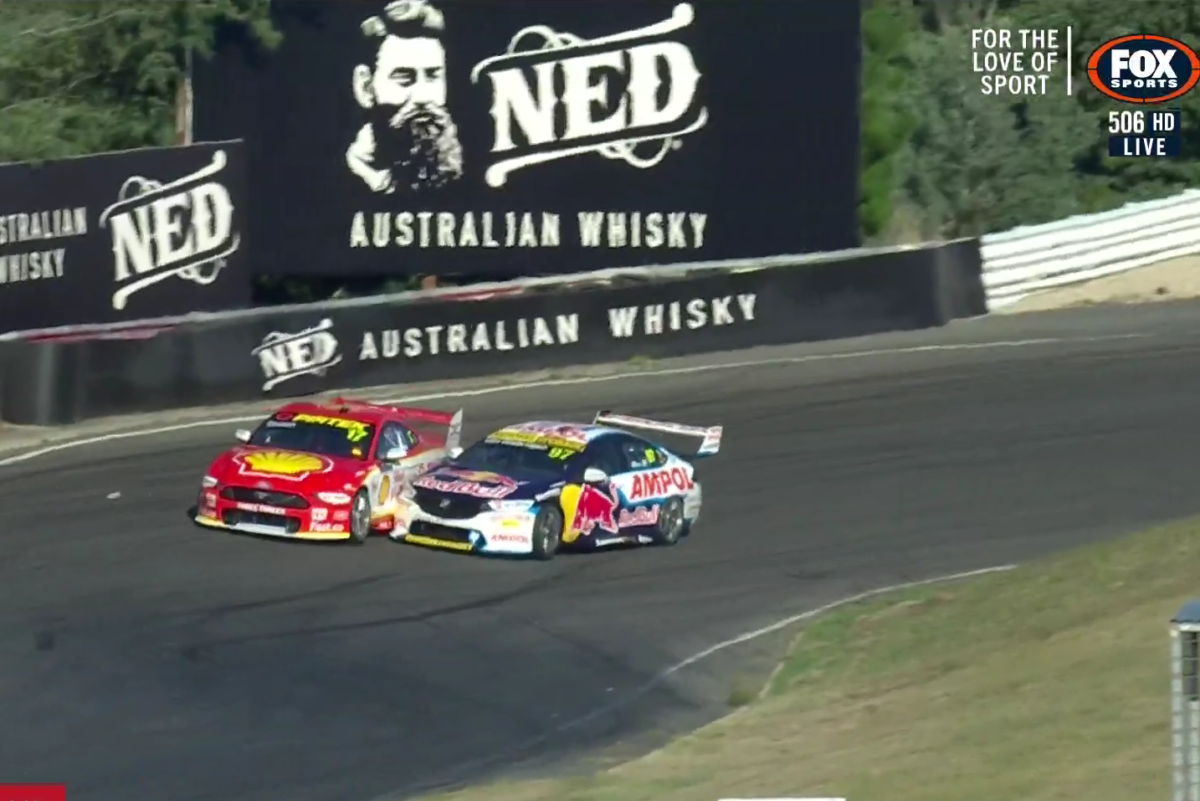 Shane van Gisbergen sets up his pass on Will Davison in Race 3. Picture: Fox Sports

After a dramatic weekend at Symmons Plains, we asked you what you think of how hard Supercar drivers compete against each other, in this week’s Pirtek poll.

The Ned Whiskey Tasmania SuperSprint was a sore affair for several teams, with three drivers in particular at the center of the action.

Shane van Gisbergen swept the event after pulling off several flashy moves, particularly in Race 3 of the season on Saturday afternoon.

One of his scalps in that matchup was Cameron Waters, who was then splitting it himself a day later in a battle with Tim Slade that sent the latter flying across the infield at speed.

Waters did not regret his part in that wild incident, and his attitude was not inconsistent with his “tough racing” comments 24 hours earlier.

The Tickford Racing driver was leading when he hit a bump from van Gisbergen coming out of the hairpin, prompting a side pass down the back straight in Race 3.

Marcos Ambrose, who spent nearly a decade in the midst of NASCAR’s tumult, said his fellow two-time Supercars champion was “breaking new ground” with those and other passes he made in that meeting.

Ambrose then mused that van Gisbergen might also have a mental advantage over his rivals, although the man himself put this down to racing rather than mind games.

No action was taken on his maneuvering, nor was any official investigation reported, but the stewards attacked Waters for his biffo with Slade.

The #6 Mustang received a pit lane penalty for reckless driving, although Tickford’s helmsman claimed he was “just racing”. [and] I would do the exact same thing again.”

“I’m all for hard racing and bumping and all that, and I really didn’t think there was much to it,” he said.

“And I hope I can give it back to people and not get penalized either.

“That’s what we want; We are an entertainment company and we don’t want to just follow the leader.”

However, in the Slade incident, the stewards decided that he had “failed to leave racing space for car 3 to his left” in attempting to defend his position when they made contact several times in the race down the back straight.

Another notable incident of late was the case of Andre Heimgartner being flagged for poor sportsmanship after repeatedly blocking Chaz Mostert in a battle they had at Sydney Motorsport Park.

Heimgartner was unhappy with that call, reasoning that, “if we don’t have good, hard racing, I mean, what’s the point?”

Racing fans were divided over van Gisbergen’s actions, if the Speedcafe.com website and social media comments are any indication.

Some enjoyed the chop and thrust, while others felt he had crossed a line in what the rules of engagement should be.

Of course, there is no doubt that all comers would rather see a genuine pageant than a procession.

However, there seems to be some debate about which contact should be treated as fair and which should not.

Is hit-and-run acceptable or not? Should a pothole be allowed that disturbs the driver in front but doesn’t completely unload him or cause him to spin? Is that just skillful racing or poor sportsmanship?

Perhaps he prefers NASCAR’s more hands-off approach, where drivers are generally left to fix themselves over the course of a season.

What do you think of the racing that the Repco Supercars Championship field produced at Symmons Plains?

Cast your vote below in this week’s Pirtek poll.