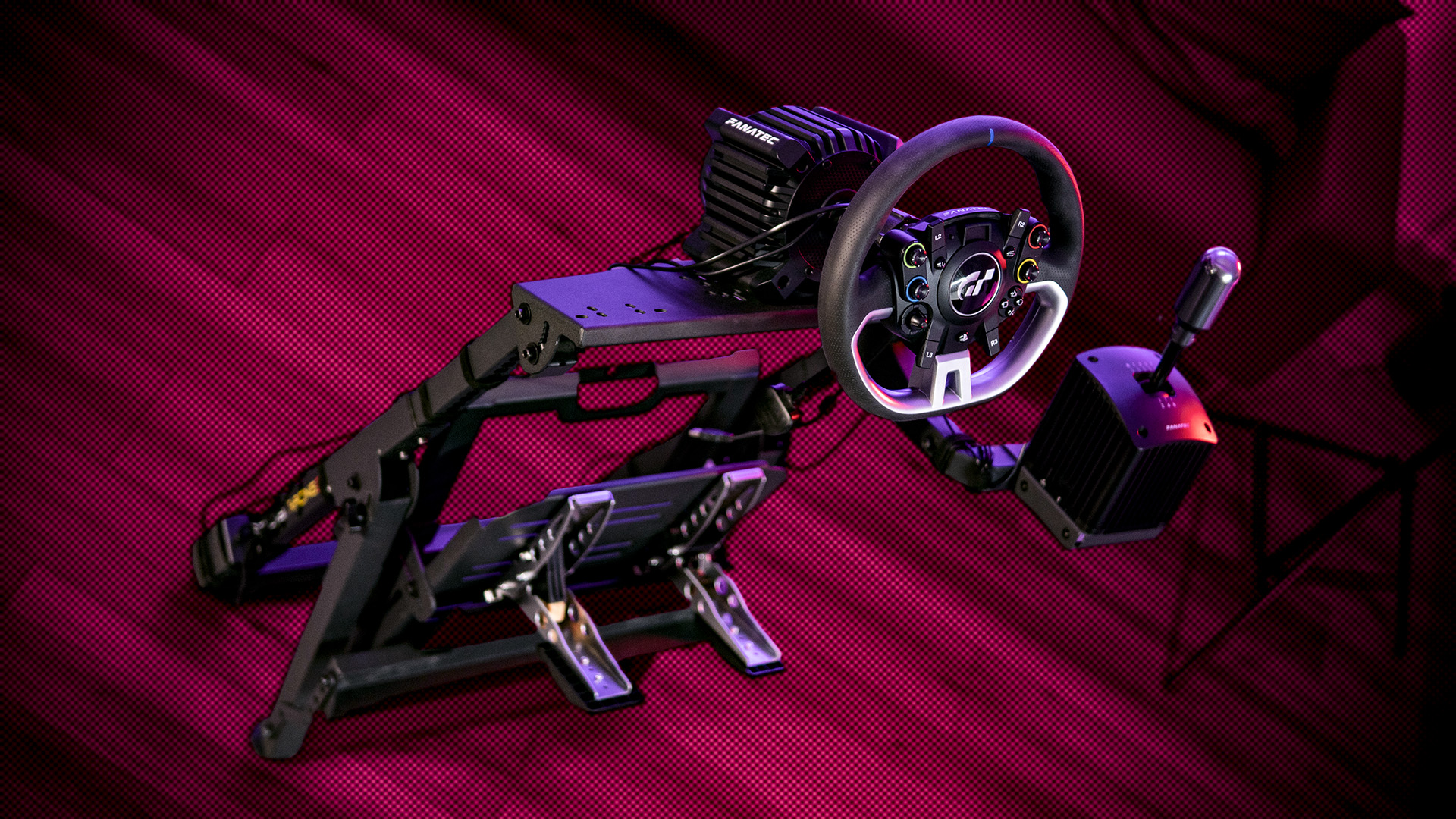 We reviewed the Next Level Racing Wheel Stand 2.0 and found it to be the perfect step up from a desk, but for those who don’t have all the space or budget for a cockpit.

Imagine the scene: you had fun playing your favorite racing games using your Logitech G923 mounted on a desk, Thrustmaster T248, or the Fanatec CSL DD/Gran Turismo DD Pro, but you’re tired of having to pull it out of a closet, mount it on your desk, plug it in, and then to race. What shit.

This is where something like the Next Level Racing Wheel Stand 2.0 comes in.

In short, this is roughly the front half of the GT Track cockpit we reviewed a while ago. Same sturdy metal construction, mounting plates and color scheme. Mounting a steering wheel and pedals on it is much more comfortable than having them on a desk, plus you get the added benefit that your peripherals won’t move under hard braking or wild steering.

This is particularly relevant if you are considering a load cell pedal kit, such as the Fanatec CSL pedals. with the optional leveling, as for these, the floor alone will not necessarily suffice.

The construction of the wheel stand is simple, very similar to the GT-Track as mentioned, but a few things are different as it is just a stand instead of a full rig.

For example, mounting the pedal plate is done with knobs instead of bolts, so adjusting or even removing the plate to go underneath to mount the pedals is far easier – something Next Level Racing should keep in mind when designing a new rig or updating the GT Track rig.

Mounting your steering wheel and pedals is basically exactly the same as on a full sim racing cockpit, with screws, washers and nuts included.

Perhaps the most welcome feature of this updated wheel stand is the small tray in front of the pedal mounting plate, which you can put your chair wheels/legs into so you don’t roll back while running.

There are four sturdy feet on the base so you don’t totally mess up your floors, and finally, the Wheel Stand 2.0 can be folded up and stored somewhere, still with your peripherals attached.

The idea is that they are permanently attached and once you are done running you move the wheel mount instead of unscrewing the wheel from your desk.

A handful of knobs hold everything secure, one of which moves the pedal plate down for racing or up and ready for storage.

Then the main build folds up like a regular folding chair before stowing and clamping the wheel tray – which, oddly enough, doesn’t have a knob to make it nice and easy. The instructions say to use two normal bolts on each side, but I ended up with one knob left over (either had an extra one in the box or missed something) so I put it on one side of the wheel tray to make it a bit easier to store.

However, there are a few things that aren’t so good about the Wheel Stand 2.0, but nothing here is a dealbreaker IMHO.

As for cable management – a very important thing to know in my book – you get nice Velcro straps with the GT Track cockpit full of grease. The Wheel Stand 2.0 however comes with plastic clamps that sit on the thicker part of the build, so if you wanted them higher up towards the wheel plate where the metal tapers in, they won’t stay in place.

I was pretty excited about these, keeping the cables flat and aligned, but unfortunately they’re pretty flimsy. They don’t wrap around the mount enough, so it’s best to use Velcro straps or normal cable ties. Keep in mind that this mount does not come with any of these.

Also, since it’s not something you would supposedly have installed all the time, the convenience of folding it up to push it around is great, but the unit is heavy. As, really heavy. As mentioned, it’s literally the front of the GT Track that’s built like a tank, so while it’s reassuringly sturdy, it’s also difficult to move around on its own.

I’m not saying I would have preferred it to be made from a cheaper material, but having specific lifting points on it, preferably with a grippy rubber grip or two, would be a huge improvement.

These negatives should not deter you from this product if you are tempted, however, and if you are wanting to take the plunge, there is one more thing that makes this product a no-brainer.

If you want a full rig at some point in the future and want it back, you don’t need to move it before buying a full rig, because Next Level Racing offers a GT Seat Addon, which bolts on on the Wheel Stand 2.0 and it becomes a pseudo-GT Track.

Oddly enough, it works out cheaper than just buying the GT Track in the first place at review time.

So as an interim purchase, it’s perfect. Priced at £179/$249, while there’s much cheaper options on the market, I’d doubt anything under £100 would have as good a build quality as the Wheel Stand 2.0, or the ability to turn it into a platform in the future.

You need something solid for today’s crop of direct-drive wheels, and that’s it.

I’m confident in saying the Wheel Stand 2.0 has turned heads here at Traxion.GG. Those of us who don’t have the budget or the space to buy a full rig are now very tempted by this configuration, whether to have it at our desk or in front of the TV.

It’s well built, it’s great that we can store it somewhere because it can fold, and the fact that it has an upgrade path makes it all the more unique. It’s a solid buy, both literally and figuratively, if you choose to buy one.

Full disclosure: This product was provided by the manufacturer for examination purposes. Here is our review policy.