The 2022 edition of the Moto G Stylus has a clearance rack vibe to it, as it’s likely one of the last new phones to be sold in the US without 5G. But if Motorola frees up space for a new season of 5G devices, that makes the 2022 G Stylus one hell of a deal.

The G Stylus, in theory, costs $299, but that’s on what appears to be a permanent markdown at $279. It’s on pace with last year’s version of the G Stylus, but Motorola has made a few improvements to this year’s edition, including a larger 5,000mAh battery, an increase from 4GB to 6GB of RAM and a 90Hz screen for faster refresh times.

It still offers a massive 6.8-inch 1080p display and, of course, its namesake built-in stylus. There’s a different processor – a MediaTek Helio G88 – which replaces last year’s Snapdragon 678 chipset. A headphone jack, microSD card slot for expanding 128GB storage and an in-box charger are all included, convenience features that are being phased out by manufacturers starting with flagships and working their way down to the mid-range. Get them while you can. 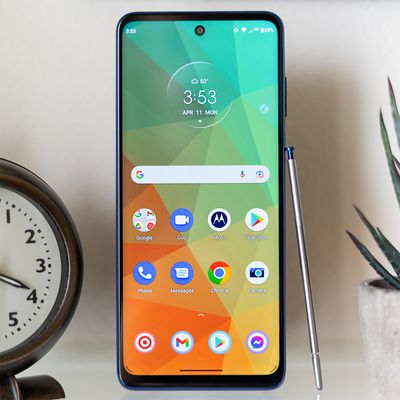 Generally speaking, not including 5G is a bit of a downside. 5G networks in the United States are starting to improve dramatically, and this will continue for the next few years. But depending on your carrier, where you live, and how you use your phone, having a 4G-only phone might not be a big deal. This is the value proposition of the clearance rack; It’s not the latest and greatest, but if it’s the right solution for you, then it could be a winner.

For its namesake feature, the Moto G Stylus 2022 offers a massive canvas: a 6.8-inch 1080p panel with a 90Hz refresh rate. It’s an LCD panel, and that’s on the dark side. I used the phone more indoors than outdoors, but still needed 80-90% brightness at all times. Visibility isn’t great in direct sunlight, but it’s just good enough to see what you’re doing. The faster-than-standard refresh rate is nice, and you’ll notice a little extra smoothness when scrolling.

As you might have guessed, that giant screen makes the whole phone bigger. Really big. There’s no chance of using this thing comfortably one-handed, and it looks ridiculous coming out of the pocket of my joggers. I got used to it in a few days, and the big screen certainly accommodates a lot of content, but it’s definitely a lot of phone.

The pen’s feature set covers all the bases. There’s a simple note-taking app that’s the first thing you’ll see when you pull the stylus out of its silo at the bottom of the phone. There’s also a coloring book and a shortcut to capture a screenshot so you can jot down or doodle on the picture. Nothing as fancy or as advanced as many, a lot The more expensive Samsung Galaxy S22 Ultra can do, but a nice tool to have when you want to jot down something without unlocking your phone, even if you don’t use it often. In fact, my own mom, a Motorola enthusiast and owner of the 2021 G Stylus, sealed hers with a case that completely covers the stylus silo. She is perfectly happy with her phone without a stylus. To each his own.

The stylus is a nice tool to have, even if you don’t use it often

Motorola claims the G Stylus’ 5,000mAh battery will last up to two days on a single charge, so I took that as a challenge. After the first day I spent testing the phone, the battery was about 50% down, but I didn’t charge it overnight and trusted it to last until on the next day. Done, and in total I got about 6.5 hours of screen time and was down to 18% by the end of day two. I spent a lot of time on Wi-Fi which probably helped, but I increased the screen refresh rate to the highest setting to push it a bit. Either way, it’s impressive endurance, and even heavy users would likely go an entire day without having to recharge the battery.

Overall performance is also good. There are stutters and slight hesitations here and there when I open apps and scroll through screens loaded with videos and images, but nothing that affects my day-to-day use. The phone’s 6GB of RAM allows many apps to run in the background, and I’m impressed with how easily I can go back to an app I was using hours ago and pick up where I left off. stopped. You can run a graphics-intensive game like Genshin Impact, expect to see some noticeable stuttering and dropped frames. But that’s not really what this phone is for anyway.

Most new phones in 2022 come with Android 12 at this point in the year, but the G Stylus still comes preloaded with Android 11. Motorola says the phone will be upgraded to Android 12 – that will be its only upgrade. OS version level – but offers no timing details. The company also promises three years of security updates every two months, which is a year longer than it promised with last year’s model. That’s an improvement, but still short of Samsung’s four-year commitment (and even five years for some of its budget A-series phones).

That’s normally when I’d cover the 5G bands this phone can use, but, in this case, it’s an easy answer: none of them. Unlike a year or two ago, 5G connectivity is something you should consider when buying a new phone. T-Mobile’s 5G network is already pretty solid; similarly, Verizon’s and AT&T’s networks will improve over the next two years. For the most part, that will mean noticeably faster speeds over 4G, so that’s something the Moto G Stylus won’t be able to take advantage of.

It’s a strike against the Moto G Stylus but not a dealbreaker. 5G expansion in the US will initially focus on major cities, so if you live somewhere more rural, having a 5G device probably isn’t a priority now or in the near future. And, if you’re otherwise happy with 4G speeds or spend most of your time on Wi-Fi anyway, then you’ll be fine with a 4G device for the next few years. The Moto G Stylus isn’t really designed to last much longer than that anyway.

There appear to be three cameras on the rear panel of the G Stylus, but one of them is a 2-megapixel depth sensor which you can ignore. There’s a 50-megapixel standard f/1.9 wide camera and an 8-megapixel ultrawide, plus a 16-megapixel selfie camera. Last year’s model had a dedicated macro camera; this time the ultrawide does double duty as a macro sensor.

Overall, the G Stylus’ cameras produce well-balanced images without going overboard on color saturation or HDR effects in high-contrast scenes. The dual rear cameras do a good job in good light, but there’s noticeable noise in images from the 8-megapixel ultrawide taken in moderately low light. There’s also a noticeable lag between when you press the shutter and when it actually takes a photo, which is quite common for a budget phone. Night vision is useful in very low light if your subject is not moving. It doesn’t work miracles, but at least this budget phone has a night mode, unlike another I recently reviewed.

Video recording is only available in 1080p, which is unusual. (Most phones these days can shoot 4K video.) There’s pretty aggressive cropping too, even if you turn electronic stabilization off. I don’t imagine the lack of 4K video resolution will bother a lot of people buying this phone, but 4K is more or less the new standard for high resolution video, so it’s something to note if video is important to you. Otherwise, 1080p clips are fine, and smaller file sizes are easier to share anyway.

You’re not going to find the Moto G Stylus on the shelves of a Verizon or T-Mobile store. Major carriers are far too interested in getting 5G phones into the hands of their customers to waste that valuable retail space on a 4G device. And it’s not just marketing bluster anymore; real 5G is really coming, and it will be really faster than 4G. But just because carriers think it’s a good time to get a 5G device in your hands doesn’t mean you absolutely have to buy one. If you’re okay with 4G and will be for the next few years, then the Moto G Stylus is a bargain.

For less than $300, it offers good performance, a huge screen, competent enough cameras, and excellent battery life. That’s not even taking into account its flagship feature: the stylus. It’s handy, and while not widely used, the phone is still cheap even without it.

If you want something a little more upgradable, the Samsung Galaxy A32 5G is a good option while it’s still in stock. For the same price as the Moto G Stylus, it offers similar performance and equally good battery life. On the other hand, its screen is smaller and of lower resolution, it only has 64 GB of storage and, of course, there is no stylus.

If you’re not worried about the future of the next generation of wireless technology and a big phone with a big screen is just right for you, then the Moto G Stylus is the deal for you.