You might already be familiar with Hori’s $59.99 Split Pad Pro, which reimagines the Nintendo Switch’s Joy-Con controllers as if they were trapped in the gym. Hori launched the controller a few years ago alongside Demon X Machina. It’s designed for people with large hands, or rather anyone whose hands feel cramped using the Switch’s included controls. Like Joy-Cons, the Split Pad Pro slides into the sides of your Switch, but it’s about twice as wide, thicker, and has ergonomic grips and contours. Each button, trigger and stick is larger and therefore easier to control. With these changes, the Switch feels like an entirely different (and better) console for gaming on the go.

Since debuting in late 2019, Hori has released multiple colorways, but this week the company launched a brand new accessory. It’s the Split Pad Pro attachment, which bundles Joy-Con-style gamepads with a wired USB attachment that can use them with your Switch when it’s in docked mode.

The Attachment is light on extra features considering its $79.99 price tag, in addition to giving you a wired controller option. It offers a headphone jack and buttons to adjust the volume or mute your headset’s microphone, if it has one. That’s really the whole pitch of this new bundle, and strangely, the attachment can’t be purchased separately.

There’s no reason current Split Pad Pro owners should feel pressured by the accessory, but it’s more enticing for first-time buyers. Although, if you spend more time using the Switch on the go than at dock, I’d suggest just getting the gamepads to save some cash. For such an expensive accessory, it seems limited to being connected to the Switch via a cable, not to mention that the headphones will cause another cable to dangle between you and the TV. And depending on your gaming setup, the nearly 10-foot-long cable might not be long enough. 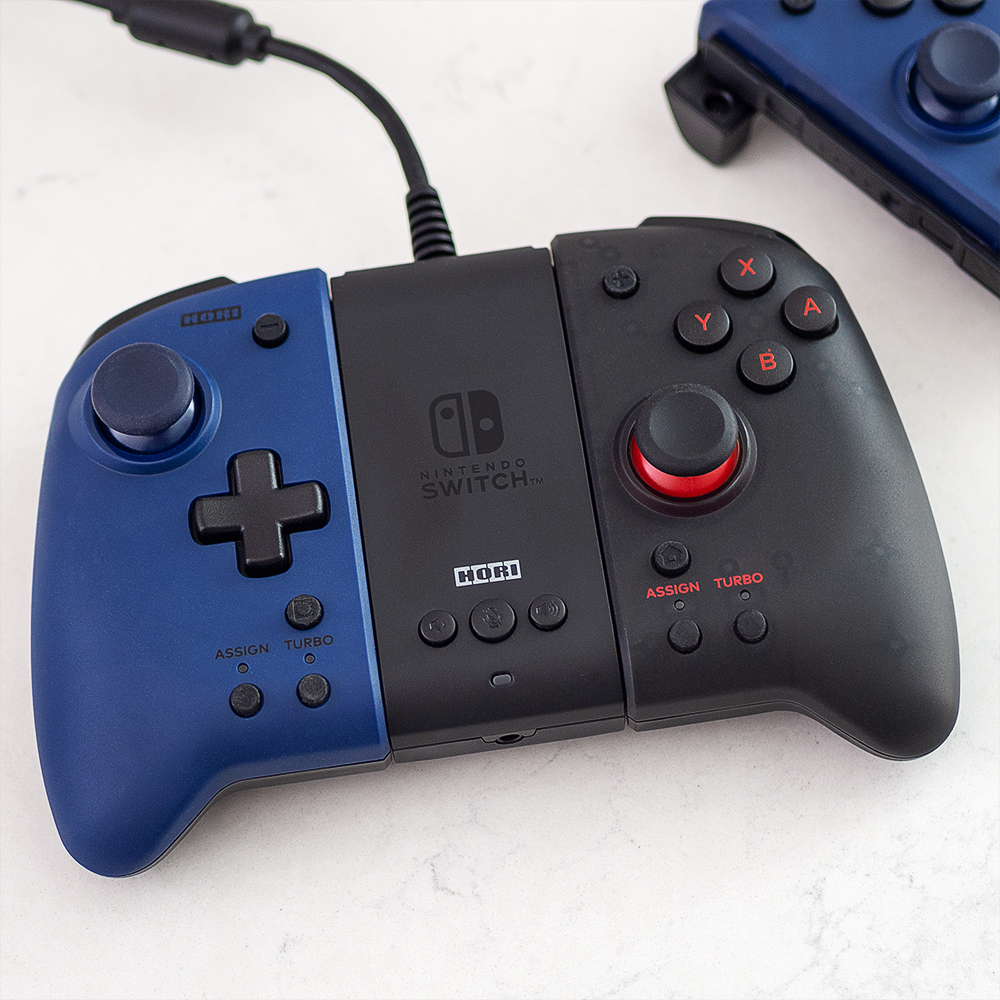 Hori would probably argue that the $79.99 price tag is the cost of buying a set of Joy-Con controllers. But even so, the Split Pad Pro pads themselves are seriously compromised in terms of functionality compared to Nintendo’s Joy-Con. They can’t work wirelessly (as in, when detached from your Switch), and they lack rumble, NFC for Amiibo, and gyro aiming for games that support it. (Although each has a remappable back paddle when connected directly to your Switch.) As for customization, the paddle on the left gamepad can be mapped to any function on the left Split Pad Pro except for the minus and screenshot buttons. It’s similar on the right side, only omitting the plus and home buttons.

Still, despite its flaky value, I love using the Split Pad Pro accessory, largely because of how it feels to use. If you love Nintendo’s Switch Pro wireless controller as much as I do, this Hori controller emulates it well as a comfortable, full-size gamepad. The Split Pad Pro’s analog sticks, triggers and buttons are every bit as responsive as Nintendo’s, with the added benefit (or annoyance, depending on the person) of being hardwired and never needing to recharge.

Funnily enough, I also enjoyed using it as a PC gamepad to play games like Ring of Elden. With this game, the lack of vibration of this product did not bother me. Steam recognized this right away, and if you can get past some of the face buttons that don’t match what’s on screen, it’s a seamless experience, at least in terms of controls. While the attachment can raise or lower the volume in Windows, audio passthrough with its headphone jack does not work. It’s hard to call this a flaw in a product that’s intended to be more of a Switch accessory, but it’s disappointing nonetheless.

Whenever I showed the Split Pad Pro accessory to people in our office, the initial delight turned to confusion when I explained the price and how little capable the accessory itself is. It would be a slightly different story if Hori started including it alongside the Split Pad Pro for a lesser price difference. But as it stands, the Split Pad Pro pads are the only essential aspect of this set, not the attachment.