The one where we pick the Laurel Park races every day…

Take a look at our another handicap here!

Eight races are on the agenda today. #1 Barb the boss (5/1) he ran a brisnet figure of 55 on his debut against $25,000 types. Although visually very unimpressive, he is tied for the best last start mark in the field. It’s worth trying in a race like this. #3 Miss Seductress (9/2) he made a solid, wide move to take second place at Charles Town, in his first start after a short break. Jerion Barbosa climbs into the saddle for the first time; he won four races on yesterday’s undercard. #4 A small slice of cake (5/2) drops to this level for the first time and tends to show speed and fade. You should be able to stay for one piece.

#5 Ravenel (5/2) she has been outclassed in her last few starts, but is now jumping into friendlier waters. She must qualify close to the pace and try to jump. #3 I had the notion (5/2) he closed out well for second in his first start after a long break, and will try to build on that performance here. She had a lot of early speed in the past, but hasn’t shown it in her recent lines. #2 Princess Adira (3/1) he has a sizable frame advantage over these along with dangerous early speed, but hasn’t raced since Oct. 8.

The pick 6 rainbow starts here. #3 Vodkatini (8/5) she finished second in her debut at Pimlico last August, in what turned out to be a very tough maiden special weight course. She hasn’t raced since, but worked steadily at Fair Grounds for Mike Stidham and looks ready for a big effort. #6 Totally Brave (6/1) he is the only one in the field who has run this year. He has run up numbers in each of his last and was third at this level. #1 Three Clubs (5/2) comes out first for Brittany Russell. As usual, the board will tell the story with her.

This race begins with Late Pick 5, which includes a carryover of over $6,000. #3 Bandit Warrior (3/1) he was a vet scratch on March 25, but has had good training since then and is back in action here. Anna’s Bandit’s younger half-sister came second in her first start after a long break and should do better here. #5 Noble Offer (9/5) she ran a great race leading on her debut and will be very tough on the pace. She ran wide and will be hoping to save more ground here. #6 Grumpy Woman (2/1) he ran a career-best 88 on the last out in a valiant effort, where he made a strong, wide rally and narrowly missed. He looks like he has a lot of potential.

#2 Fran worries (9/2) he ships from Parx and looks like the main speed threat in the race. You should be able to cross to the front and clear, although the inside knight also has early speed. However, his pace numbers are not as good as Fran’s Worrier. #7 The Werewolf (8/5) was somewhat ambitiously placed last in the Not For Love Stakes. Although he had an impressive figure of 90, he was no match for the likes of Whereshetoldmetogo and Jaxon Traveler. He should be more at home with these. #6 Main Boss (4/1) he won at this level early in the competition and will push the pace from the outside.

#7 Jemison (9/5) he’s one of two here for Brittany Russell, and he seems the best-intentioned. It sold for $150,000 at the Fasig-Tipton sale in 2019 and has been working well in advance of her long-awaited debut. Jevian Toledo gets the call in this case, a telltale sign. #3 The sky has fire (5/2) he always runs well, but he hates to win. He has finished second or third seven times in his career in 11 starts. He has a lot of speed early on, but he is never able to hold up late. We’ll see if this is different. #4 Mutasallem (2/9) he showed promise early in his career, including a runner-up finish to Derby opener Dynamic One, but hasn’t raced in nearly a year. This will be his first start for Scott Lake.

#2 Commander General (8/5) he chased and ran a game second at this level, in his first start for Kieron Magee. He has shown promise in two corners, but hasn’t raced in more than one corner since October. #5 Real Number (9/5) he has had ups and downs in his recent games and is making his first home start since late January. He ran a great race at Aqueduct two back, only failing after a wide ride, and will try to channel that form here. #1 Stone Brave (6/1) he has a lot of speed at the end and should take advantage of the extra distance. 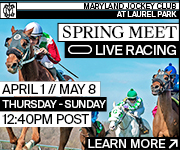 #5 Special Freedom (9/5) he has run big numbers in his last two starts and drops to this level for the first time. #1 lunar business (3/1) She impressively broke her maiden in the gate-to-wire style and it can be difficult to get back in the lead. #3 Happy Life (3/1) she makes her first start of the year, and was third at Aqueduct after a rocky start.